I can't believe this actually worked! Two quart jars of kombucha, each brewed with half a thinly sliced Fuji apple. The brew on the left is two regular black tea bags and the brew on the right is two decaf green tea bags because I wanted to try a decaf brew, but I wanted to make sure my scoby got some as many camellia sinensis nutrients as possible, and it did! It actually made the stronger scoby! Also, adorably tiny. The regular black tea produced just a skin of a scoby.    And how does it taste? Like apple cider vinegar, which I think is yummy. Okay, full disclosure--it isn't 100% refined-sugar free; for the starter tea (the kombucha added from a previous batch to help inoculate the initial fermentation with even more of the beneficial yeasts and bacteria), I used half a cup of straight-brewed kombucha and half a cup of scoby hotel tea, which is supposedly to be an even more concentrated source of yeasts and bacteria. These kombuchas had at least some sugar add
Post a Comment
Read more 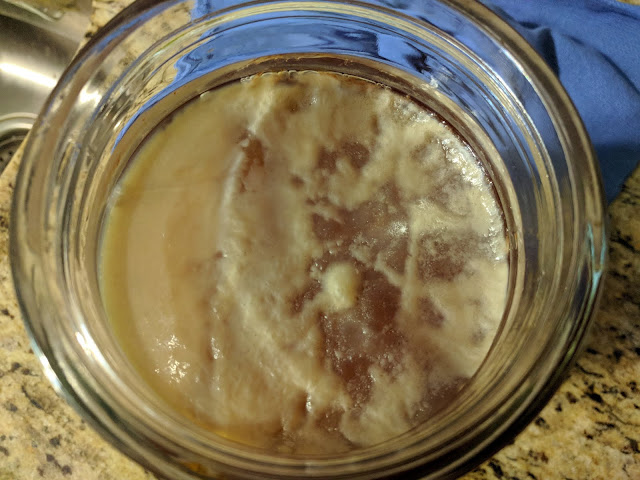 Julie
I used to live in a condo with a one-wall kitchen, but moved into a four-walled kitchen in Nov. 09. Then I downsized a bit to a three-walled kitchen in '15, and that's where I am now. I invaded cooking school and earned pastry, baking, and culinary certificates. I disliked cooking while growing up. It was just another chore, and I’d avoid it, but in college, I volunteered in soup kitchens, and loved it. When I moved into my first apartment and had personal access to a real kitchen, I craved my mom’s Filipino home-cooking. I’d call her a lot so she could walk me through recipes, which I still love cooking. Then, several years ago, I went on the South Beach Diet, lost a lot of weight, but gave up after awhile because the food I liked to cook wasn’t low-carb, and my menus were boring. In 2006, I enrolled in culinary school, finishing in 2008, but I've never stopped learning about food--where it comes from, how people perceive it, how to cook it, where it comes from, and especially what it tastes like.